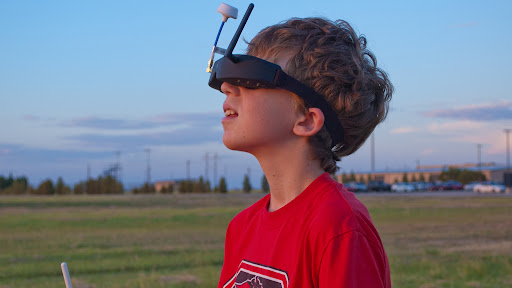 FPV flying has been the big breakthrough and game changer in unmanned aircraft technology.  FPV ground station equipment along with FPV transmitters and cameras has opened up a whole new world of aerial photography and cinematography to us.

This FPV flying technology allows for a video camera to be mounted on an unmanned aircraft which then transmits live video to the ground pilot.  The ground pilot is flying the drone as if they are on-board.   This is accomplished by tiny video cameras and wireless RF links.

In this article along with informative videos, we highlight the technology and equipment such as FPV ground stations, goggles, transmitters and cameras.  We show you how to setup FPV on a Phantom drone and  the last video shows you FPV goggles in action which give a very unique perspective while flying.

Before FPV, the drone pilot had to fly the remote control aircraft using their ground vision. This is fine in an open park where you can see the RC aircraft easily.

FPV enables drones to fly much higher and further than every before.  I have seen drones flying up to 1 km and 10 km in distance. Flying with FPV allows for better and more exact flying in the most difficult of terrains such as forests, mountains and inside buildings.

Today unmanned aircraft are being used in aerial inspections of building sites, farms, pipelines, electrical towers, search and rescue missions as well as in advertising and promotion. Every week, new uses for drones are being announced.

On the lower end of modern quadcopters and multirotors, most of the camera setups only serve a single function and that is to record video or stills. You never get to see what the unmanned aircraft sees until it lands and you download the digital files from the memory card.

However, with more competition in the UAV sector, FPV technology is being added on more models even at the lower end.

For some drone models you need to buy FPV equipment separately. The easiest way to do this is to buy an FPV kit.

There is no doubt that drones would never become so popular without FPV technology.  Watch these short FPV videos of beautiful scenery. Absolutely stunning views.