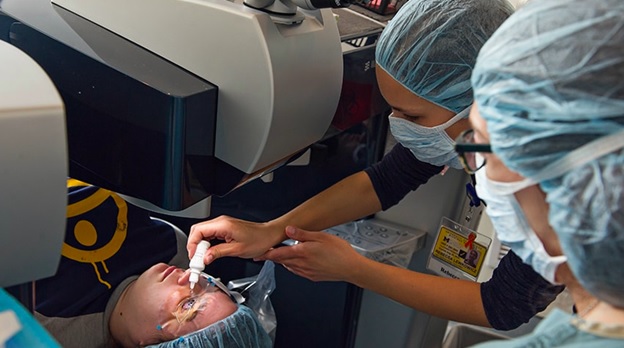 LASIK eye surgery may mean no more corrective lenses. But it’s not right for everybody. Learn whether you’re a good candidate and what to consider as you weigh your decision.

If you’re tired of wearing eyeglasses or contact lenses, you may wonder whether LASIK surgery is right for you. LASIK is a type of refractive eye surgery.

In general, most people who have laser-assisted in situ keratomileusis (LASIK) eye surgery achieve 20/20 vision or better, which works well for most activities. But most people still eventually need glasses for driving at night or reading as they get older.

Nearsightedness (myopia) is a condition in which you see nearby objects clearly, but distant objects are blurry. When your eyeball is slightly longer than normal or when the cornea curves too sharply, light rays focus in front of the retina and blur distant vision. You can see objects that are close more clearly, but not those that are far away.

One possible benefit of having been nearsighted most of your life is that this condition actually compensates for the presbyopia that inevitability develops as you get older. A nearsighted eye will focus near objects by itself without reading glasses. LASIK surgery removes this near focus because the nearsightedness has been corrected. This means that as you get older you will need to use reading glasses. Many people are happy to trade clear distance vision when they are younger for having to wear “cheaters” for reading when they are older.

Farsightedness (hyperopia) is a condition in which you can see far objects clearly, but nearby objects are blurry. When you have a shorter than average eyeball or a cornea that is too flat, light focuses behind the retina instead of on it. This blurs near vision and sometimes distant vision.

Astigmatism causes overall blurry vision. When the cornea curves or flattens unevenly, the result is astigmatism, which disrupts the focus of near and distant vision.

Traditionally, blurry vision is corrected by bending (refracting) light rays with glasses or contact lenses. But reshaping the cornea (the dome-shaped transparent tissue at the front of your eye) itself also can provide the necessary refraction and vision correction.

One is near-universal: “to wake up in the morning and not reach for your glasses or spend two minutes putting in contact lenses,”

Most want to enjoy work and leisure with a clear vision, too.

But the idea of eye surgery — and being awake during it — can be scary. Nor is the procedure, which involves cutting a small flap in the cornea surface cells in order to reshape the cornea underneath it, right for everyone.

Because LASIK isn’t typically covered by insurance, some people might choose to save and pay for it via a flexible spending account.

Performed as an outpatient procedure, LASIK might take about 20 minutes — “and most of that time is spent getting set up for surgery,” Hood notes.

Those deemed unsuitable often are 40 and older. That’s because they may have presbyopia, where the lens of the eye becomes stiff and hinders close-up vision (LASIK alters the cornea, not the lens)

Another similar surgery is known as photorefractive keratectomy, or PRK, which can be better for people with high prescriptions or very thin corneas, Hood notes, because they lack “enough residual cornea to be structurally sound” for the flap-making that LASIK involves.

It doesn’t take long to gain clear sight. LASIK patients will notice a difference in a few hours. “You’re seeing really, really well by the next day,” Hood says. Most normal activities can resume within 48 hours.

Those who receive PRK, however, can expect a longer recovery — about a month — and some minor pain due to the corneal surface roughness.

Although LASIK may cause dry eyes for up to three months (and can be managed with artificial tears), the odds of it becoming a permanent issue are rare. Another uncommon side effect: nighttime glare or halos.

Whether they choose LASIK or PRK, many patients view the prospect as life-changing — and a means to enjoy even basic activities that once were hindered by poor vision.

Flaps created during LASIK aren’t secured, so patients should not rub their eyes while they heal. Any trauma to a flap (such as getting poked by a tree branch or fingernail) could dislodge it — even years after surgery, Hood says. Visit your eye doctor immediately if such contact occurs.

Because no flaps are created via PRK, those patients don’t have that risk. Athletes and active individuals might pursue that option to perform at their best.

LASIK recipients can regain 20/20 vision. Just don’t expect superhuman sight: “At best, we’re going to achieve what we can get with glasses or contact lenses,” Hood says.

For those with higher prescriptions, that prospect may vary: “The chances of us getting a 20/20 are about 20 or 30 percent,” he says, “but we have a very good chance of you functioning without glasses.”

Again, those with a higher prescription prior to surgery are more likely to see a minor decrease in vision quality over time — a condition known as myopic regression.

“There can be a tendency for it to drift back, but never to the same degree,” Hood says. That might require a doctor-patient discussion, he notes, as a second LASIK surgery has increased different risks.

LASIK surgery has a good track record. Complications that result in a loss of vision are rare, and most people are satisfied with the results. Certain side effects, particularly dry eyes and temporary visual disturbances (such as glare), are fairly common. But these usually clear up after a few weeks or months, and very few people consider them to be a long-term problem.